In Need of a Knight — Christi Caldwell 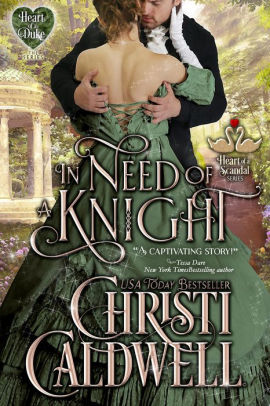 When I received all my rights back, I put Aldora and Michael’s story through a rewrite, adding a new prologue, epilogue, characters, and expanded scenes. However, I still did not publish the book--until now. You see, when I met Aldora’s friends, I was intrigued. Here were new ladies dreaming of love. I could not simply forget those characters, and yet neither, given the timeline of the Heart of a Duke series, could I tell their stories, either. Then, one of Aldora’s friends spoke to me, and spurred the creation of The Heart of a Scandal series, the first ever Heart of a Duke spin-off!.

For those of you who've been looking for Aldora and Michael's story, I hope you enjoy!

Hugs,
Christi
~Official Blurb~
Years earlier, a gypsy woman passed to Lady Aldora Adamson and her friends a heart pendant that promised them each the heart of a duke.

Now, a young lady, with her family facing ruin and scandal, Lady Aldora doesn't have time for mythical stories about cheap baubles. She needs to save her younger siblings and has resigned herself to marrying a titled gentleman with wealth, power, and a respectable name. She sets her bespectacled sights upon the Marquess of St. James. Until...

Turned out by his father after a tragic scandal, Lord Michael Knightly has grown into a powerful, but self-made man. With the whispers and stares that still follow him, he's been shut out of respectable society. He would rather be anywhere but London...

Then he meets Lady Aldora, a young woman who mistakes him for his brother, the Marquess of St. James. The connection between Aldora and Michael is immediate and as they come to know one another, Aldora's feelings for Michael grow.

Now, Aldora is left to choose between her responsibilities as a sister and her love for Michael.