In My Hood — Endy 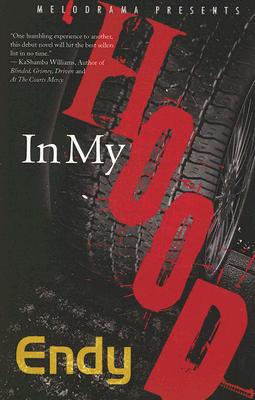 Share:
Every city has a hood, and every hood has a drug-infested corner. As a once successful businesswoman, Desiree “Rae-Rae” Johnson use to avoid driving through that section of the neighborhood—until she fell on hard times. After becoming a crack addict, she starts living with her soul mate Bilal “Bunchy” Wilson, the man who introduced her to cocaine. After witnessing a double murder and struggling to survive the everyday dramas to support their drug habits, they manage to pull off one of the biggest robberies in New Jersey’s history. Bilal is sentenced to life for murder and armed robbery and meets his sudden death in prison, leaving Desiree to face the demons of her past alone. After turning her life around, she meets one of the top men in the game, Ishmael Jenkins, and falls for him, not knowing his secret past. Ishmael is comfortable in his position in the hood and falls for Desiree just as hard. All hell breaks loose as Ishmael’s loyalty is tested and Desiree struggles to maintain her sobriety. Between love, murder and a possible relapse, will they survive? Or will they be another statistic in this society in which we live? Have you seen this in your hood? Well, this is what happened In My ’Hood.