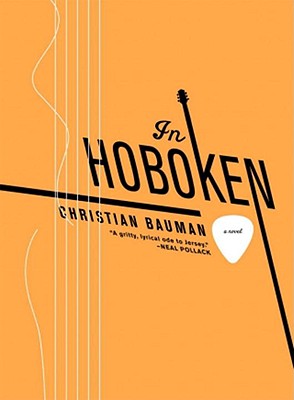 “Bauman writes with precision, in prose that reverberates . . . strong, compelling work.”—Robert Stone
As the son of a folk singer whose suicide gained him cult status, Thatcher has a leg up on New York’s music scene. Instead, he decides to keep his parentage secret and take his guitar across the river to seedy Hoboken, New Jersey, to form a band.
There, amidst the tenements and dive bars and all-night diners, Thatcher and his friends struggle to make meaningful music in a culture turning away from it.
A wicked sense of humor turns out to be key for the motley crew: manager Marsh, the beloved, polio-stricken local rock-and-roll kingpin; lesbian singer/songwriter Lou, to whom Thatcher is deeply attracted; James, guitar virtuoso and daytime World Trade Center employee, not to mention owner of the floor Thatcher is sleeping on; and locals such as Orris, the overweight, half-blind prophet of Hoboken’s west side and patient at the mental clinic where Thatcher is a clerk.
As in Roddy Doyle’s The Commitments and Nick Hornby’s High Fidelity,the music is at the heart of it all. But in In Hoboken the place and the people turn out to be just as inspiring.
Christian Bauman’sacclaimed debut The Ice Beneath You, and his second novel, Voodoo Lounge,were both based on his experiences as an American soldier in the mid-1990s. He now lives outside Philadelphia, Pennsylvania.
Reviews from Goodreads.com