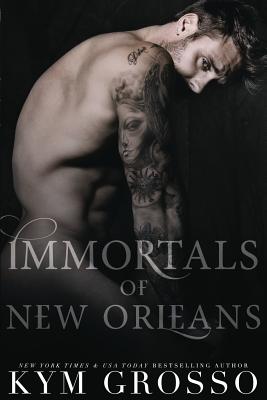 From NYTs & USA Today Bestselling Author Kym Grosso The Immortals of New Orleans Léopold’s Wicked Embrace (Book 5) Seductive and lethal vampire, Léopold Devereoux, returns to the Big Easy to find a killer. His search leads him to a beautiful and mysterious woman, who awakens desires and emotions that he’s long fought to keep buried. After centuries of self-imposed solitude, the billionaire philanthropist struggles to restrain his growing thirst for the intriguing, lovely female who’s captured his attention. Laryssa Theriot, an antiques proprietor in the Vieux Carré, agrees to help the debonair stranger, who seeks her assistance. She withholds her secret abilities, afraid to trust the man who threatens to unleash her darkest fantasies. As the menacing force that has stalked Laryssa for years finally catches up to her, she submits, putting her life into the hands of the dominant vampire who offers his protection. Deep in the heart of New Orleans, they embark on a perilous adventure, forced to search for an ancient sacrificial relic that they hope will save their lives. As they face formidable challenges, Léopold and Laryssa surrender to the passionate intimacy that possesses them. After hundreds of years of denying himself love, will Léopold bond to the woman who has begun to crack the impenetrable shell around his heart? Dimitri (Book 6) Dimitri LeBlanc, sexy and charismatic beta of Acadian Wolves, survives a brutal attack after his wolf succumbs to a dark force, threatening his very existence. Waking up, tied to a bed, his amusement transforms into lust as a beautiful stranger heals his beast. Intrigued by his mysterious savior, the tables quickly turn, when in the heat of a dark desert night, he rescues her from a barbaric Alpha. Gillian Michel, a New York City photographer, conceals a secret hybrid past and mystical abilities. An entire lifetime, she’s deliberately avoided wolves, but a seductive encounter with an irresistible beta leaves her craving his touch, his lips on hers. Deep in the heart of New Orleans, Dimitri and Gillian seek a cure to the parasite maligning his beast. Still on the run from a malevolent force, they lure their enemy into the bayou. Will Gillian sacrifice her gifts to save the man she loves, destroying her own immortality? And will Dimitri eradicate the evil that has invaded his soul while protecting his mate from an adversary who threatens to kill them both? Lost Embrace (Book 6.5) An erotic paranormal romance novella Dominant vampire leader, Kade Issacson, is devastated when his fiancée, Sydney Willows, is nearly killed by a demon. As her transition into the supernatural tests the limits of their bond, he considers how far he’d go to cure her affliction. Deep in the heart of New Orleans, Kade struggles to keep her alive while searching for an escaped killer who promises to end Sydney’s life once and for all. Will Kade share the woman he loves for one passionate night in order to save her? Jax (Book 7) Agrestis Wolves’ Alpha, Jax Chandler, is on a mission to exact retribution after being captured and tortured by an enigmatic adversary. When the sophisticated publishing mogul rescues a beautiful wolf, he recognizes the woman he’d once believed to be his mate. Captivated, he sets out to discover her secrets and teaches her to embrace submission. With Alpha blood running through her veins, Katrina Livingston’s shifter magic has been systematically stolen over time. On the run from demonic forces, she turns to the New York Alpha, the one she’s both hurt and protected. As she indulges in his erotic world, she struggles to resist the instinct to mate with Jax, a bond she believes will kill him. From New York to New Orleans, they embark on a sensual adventure, discovering sorcery that could eradicate his entire pack. Will they survive the predator that comes ever closer to destroying their lives?
Reviews from Goodreads.com