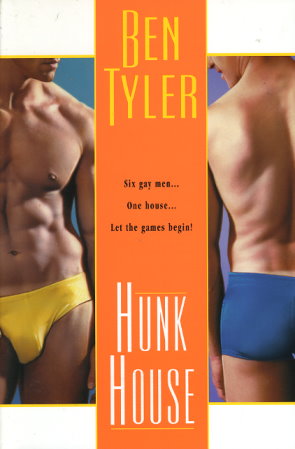 Author Ben Tyler took on gay Hollywood in his steamy debut novel Tricks of the Trade. Now, he mixes a deliciously witty cocktail of tight bodies and tell-all, show-all TV

Dulcit City, Iowa, is about to turn on -- and get turned on by -- a new reality TV show with a twist . . . a gay one. It's the brainchild of senior programming director Hamilton Ipswich Peabody III. Once a producer for a high-profile television entertainment magazine, Hamilton's sexploits with a news anchor got him booted out of Los Angeles to a city with more anglers than angels.

Now, it's up to Hamilton to save local cable channel KRUQ, but he's going to raise more than ratings with the groundbreaking new show Hunk House. Six hot gay men in close quarters, with their every move videotaped. Each week, one contestant gets voted out. And when all six gorgeous competitors get an eyeful -- and more -- of each other, the no-sex rule goes out the window.

But will Dulcit City's breeders welcome Hunk House with open arms -- or closed minds? Is Hamilton's dream of returning to H-Wood about to come true, even as he stumbles unexpectedly across Mr. Right? And who is the mysterious guy -- or ghost -- treating each contestant to a single night of mind-blowing sex? Tune in to next week's episode of Hunk House to find out...
Reviews from Goodreads.com