How to Be a Proper Lady — Katharine Ashe 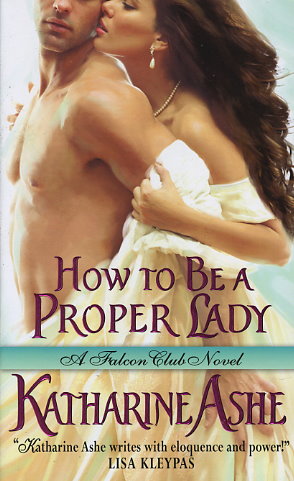 The Rules of Being a Proper Lady
1) Never take steps greater than six inches apart.
2) Never look boldly at a gentleman.
3) And never, ever, kiss a man who is not your fiance.

But beautiful, bold Viola Carlyle doesn't care about the rules. And she desperately wants to kiss the notoriously tempting Captain Jin Seton, the man who brought her kicking and fighting back to English society. Kidnapped as a child, now she longs to return to that life of freedom where she was able to live -- and love -- as she wished.

Having hunted Viola for two years, Jin Seton has finally found his good luck -- for, by finding Viola, his oldest, deepest debt will at last be paid. And although he has vowed not to let her win his heart, this very improper lady might finally be the one who tames him.
Reviews from Goodreads.com

This latest chapter in the Falcon Club series was great. I really thought the story of Jin Seaton and Viola Carlyle were totally exceptional. The storyline was very believable and refreshing. It seemed to me that fate had entwined two people who needed each other. If you know the story, Viola was taken at the age of ten by a man who was her father. Fionn Dally was a smuggler who had an affair with Maria Harrell thus Viola was born. But Maria married Charles Carlyle, a Baron. Even though Fionn wanted his lover back, she wouldn't go because she already had a family with her Baron. The family thought Viola was dead, but her sister Serena never believed that her little sister was gone but kidnapped. Enter Jin Seaton a Captain of his own vessel who wanted to pay a debt of honor to Serena's husband who saved him when he was just a boy. So Jin decides to search for the missing sister and return her to her family in England. When Jin finally meets the lost sister, she is a Captain of her own crew who happened to sink his ship. Boy, do sparks fly between both of them. One angry man meets his match with one devil of a woman. Thanks Ms Ashe for writing another great story.