How Not to Spend Your Senior Year — Cameron Dokey 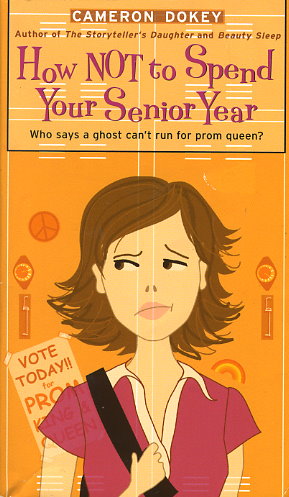 Rule #1: If at all possible, don't pretend to be something you're not. Specifically, don't play dead. Trust me on this one. I did it, so I should know.

Jo O'Connor has spent her whole life moving around. When it comes to new schools, there's not a trick in the book about starting over that Jo doesn't know. But life is about to teach her a new trick: how to disappear entirely.

Rule #2: Always expect the Spanish Inquisition, no matter what anyone else does.

They have to move again. Now. This very night. Jo knows better than to argue. Her dad is the key witness in a major case against a big-time bad guy. But Jo just can't resist one last visit to the school where she's been so happy. All she wants is to say good-bye. That can't cause any problems, can it?

Rule #3: Never assume you can predict the future.

Now Jo's one last visit has landed her smack in the middle of a ghost story. Specifically, her own. By the time it's over, she'll have a whole new set of rules about what's real, what's make-believe, and -- most of all -- what's important.
Reviews from Goodreads.com