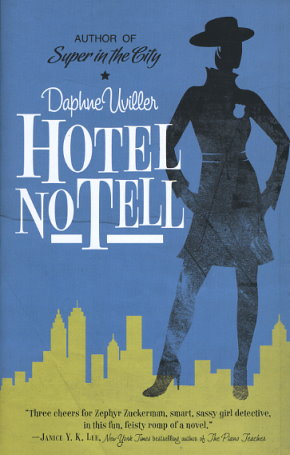 The ever resourceful detective Zephyr Zuckerman is now armed and undercover in a Greenwich Village hotel where mysteries -- from garbage-grabbing guests to the reservation system -- lurk around every corner.

Now working as a junior detective with the New York City Special Investigations Commission, Zephyr's gone incognito as a concierge to find out who laundered a hundred grand off the hotel books -- and why. But the discovery of a prone, flush-faced guest gasping for air in room 502 only hints at the sinister goings-on inside this funky establishment. While the rapid response of the fire department leads to a sweaty date with a smooth-talking, rock-climbing rescue worker, Zephyr finds herself even more hot and bothered by an attempted murder on her watch. Could the smart-mouthed Japanese yenta across the hall know more than she's telling? How are cryptic phone calls from a mysterious corporation linked to the victim in 502?

Under pressure and overwhelmed, Zephyr soon finds that a concierge cover is no protection in a place where crime, like the city itself, never sleeps.