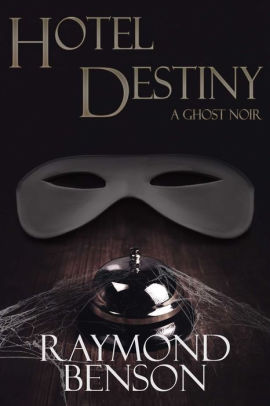 WHAT IF YOU, AS A GHOST, HAD TO SOLVE YOUR OWN MURDER?From internationally acclaimed and New York Times best-selling author Raymond Benson comes a novel that is a ghost story with a distinctive noir sensibility mixed with David Lynchian surrealism.The year is 1985. Manhattan's Times Square area is sleazy, and the streets are full of what Coleman Sackler calls New York Street Skunk. Cole is the night manager and self-proclaimed hotel detective for the transient Hotel Destiny, which has been plagued with scandals over the century, including several murders, gangster occupation and ownership, and fleabag status during the 1960s and 70s. Five recent slayings in the building have been attributed to—the police believe—one killer. During the gala grand re-opening Halloween party, Cole Sackler himself is murdered by a masked man. But hold on! Cole awakes and is still in the hotel—as a ghost. Prior to his death, a mysterious woman had told him that hidden portals located throughout the building can lead one to other time periods, and that the key to Cole's destiny is in the hotel's past and embedded in its many secrets.Thus, Cole's spirit sets out to solve his own murder by dropping in on living characters throughout Hotel Destiny's history and observing and/or interacting with them. His goal is to discover the identity of his killer, as well as learn the ironic truth about his own family, his heritage, and himself!*****No matter how hard I tried to get a jump on the author, he was always ten maddening steps ahead of me. HOTEL DESTINY is a cocktail more potent than any you've ever enjoyed – a mix of murder mystery in the best noir tradition, and a ghost story that's one-hundred proof. By the time I'd finished it off, I was still reeling from the effects! -Robert Masello, author of THE HAUNTING OF H. G. WELLSRaymond Benson has crafted a twisty, ghostly, historical detective noir mystery, rich in place and time, and utterly unique. Highly recommended! --Tori Eldridge, Anthony and Lefty-nominated author of THE NINJA'S BLADEI had a great stay at HOTEL DESTINY. Raymond Benson displays yet another facet of his formidable storytelling talent in this mind-bending, time-bending mystery. It's a haunting novel in more ways than one, so expect to lose some sleep — while reading, and afterward. -Steve Goble, author of the SPIDER JOHN historical pirate mysteriesHardboiled, frightening, and deeply mysterious, HOTEL DESTINY is a highly entertaining throwback to the days of fun in fiction. Benson delivers a novel where a thousand unlikely things happen, yet the reader never questions, never doubts, and always understands. This is how you know you are in the hands of a master plotter. -Darren Callahan, award-winning playwright, novelist, and filmmaker
Reviews from Goodreads.com