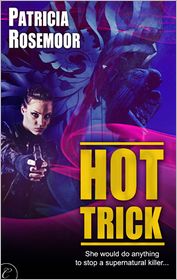 Shelley Caldwell's career as a Chicago homicide detective is complicated by her city's supernatural underground, her abilities as a sensitive and her half-vampire lover, Jake DeAtley.

Meeting a crazy banshee with visions of someone drowning in a trunk is the latest strange incident. Shelley ignores the warning -- until famous illusionist Sebastian Cole reveals his new trick: escaping from a locked trunk submerged in the Chicago River. Sebastian gets out alive, but a woman across town isn't so lucky. Then another person is found killed in circumstances eerily similar to one of Sebastian's acts.

Shelley is certain there's a link between the magician and the murders. Even more unsettling is the way Sebastian invades her mind and stirs her senses. Not to mention Jake's negative reaction to the man. Can Shelley fight off Sebastian's supernatural influence to determine if he's the killer...or another victim?