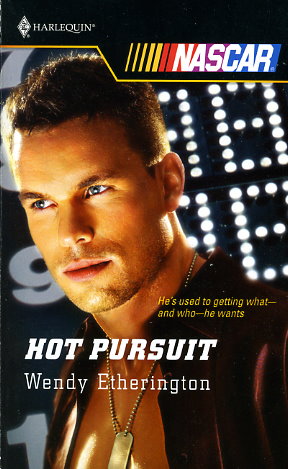 He's ready to kick into high gear...so why is she hitting the brakes?

NASCAR PR rep Kylie Palmer is a widow and a single mom... and she sure isn't interested in dating--especially not someone with a dangerous job! But bounty hunter A. T. Treadway is young, gorgeous and every inch the perfect guy. Suddenly Kylie is struggling between her fear...and a feeling she never thought she'd experience again.

A.T. has his job cut out for him. His secret investigation to find a fugitive is drawing him deeper into the world of NASCAR--and closer to Kylie, a woman who is proving harder to pursue than his elusive target. But when their fragile relationship is tested, can A.T. convince Kylie that he's worth the risk?
Reviews from Goodreads.com

Hot Pursuit by Wendy Etherington
Harlequin NASCAR Library
Secrets And Legends Series Book 12
Widow Kylie Palmer works for Motor Media Group and is the PR rep for NASCAR driver Will Branch. She’s been busy so far this season with the media wanting to drill her client on his missing father, Hilton Branch. When she meets her sons soccer coach she fights the attraction. She blames it on his being younger than her, but the truth may be that she’s still not ready to take a second chance on love after her husband was killed over four years ago.

Sean Treadway knew the minute he saw Ryan’s mom that she was special. He also knew her connection to the Branch family but she didn’t know he had one as well. He also knew that she wouldn’t date someone with a dangerous job so he just mentioned his brothers business which was mostly putting security alarms in. No sense telling her he was a bounty hunter and losing any chance of dating her, right?

As the series goes into the last few books one of the loose ends gets tied up, Hilton Branch. There are still a few things to settle like the Grosso/Murphy feud and who really is to blame for it. Patsy Grosso has gone missing, Kim Murphy is facing surgery and her mother is still AWOL. The thirteenth book brings us back to Maximus Racing, the team Kent Grosso is with, and it looks like things are getting shaken up there in Risky Moves.
http://justjudysjumbles.blogspot.com/2013/05/harlequin-nascar-library-collection.html