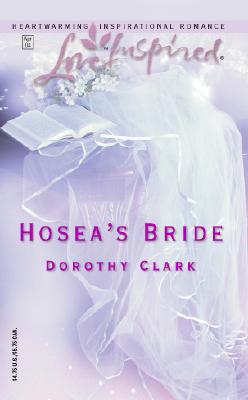 Forced into prostitution by her stepfather,

Angela Warren found salvation one dark, terrifying night in Crossroads Church. The words of a handsome visiting preacher and the strength she found in the Lord led her to a new life in Harmony, Colorado.

COULD SHE WEAR A WHITE VEIL?

But Angela's hard-won happiness was threatened when her church appointed a new pastor, Hosea Stevens -- the very preacher who'd saved her years ago. Angela tried to avoid him, lest he recognize her, but Hosea persisted in knowing her better. Panicked by his romantic interest -- and her own feelings -- Angela fled, but Hosea pursued her. Could he bring her back to his church...as his bride?
Reviews from Goodreads.com

This book is a bit different, in that it focuses on an ex-prostitute. Though I'm not sure where the story took place, apparently six year after Angela had been saved and rescued from the pimp who threatened her life if she ever left prostitution, Angela meets the preacher who saved her when he is called to her church - half way across the United States...

Hosea is of course immediately attracted to Angela and remembers her from six years ago. A review stated that he "fell for her" when she was saved, but I don't believe that's true. I think this was a pure story. I believe he never forgot that lonely, frightened prostitute he led to the Lord when his ministry was just beginning. I believe that his attraction came when he saw Angela in the church, and he saw her purity. Angela had to fight against her attraction for him. She believed she was tainted and could never marry a man because marrying a prostitute would taint him as well. She fought against her love for him.

The last chapter, of course, was the best. The "sermon" Hosea gave Angela was very revealing, and one that I believe many Christians need to hear. The blood Jesus shed on the cross had cleansed us from our sins. "What God has made clean, man cannot make unclean" is a powerful message and one Angela needed to hear.

I only have a couple issues with this story:
1. Hosea asks God to give him an answer on rather he's going to get Angela for a wife. Looking down at his doddled drawing, he finds the scripture reference in the doodling then reads it in his Bible and rejoices that he's gotten his answer. Then he calls his parents and tells them. Call me a skeptic, but God has NEVER answered me in that way, and it was a little hard to stomach. Oh, God has given me answers through scripture before, but He quotes them to me. He doesn't give me a scripture to look up. I've been praying for years, asking God rather I'll ever find someone to marry or not, and so far I haven't received any answer. I think that as far as relationships go, God wants us to have faith. He may give us a feeling when we meet someone and say "Yes. That's the one for you." But I just couldn't beiieve the way it was apparently revealed to Hosea.

2. Hosea is planning on keeping Angela's past a secret and deal with it if it ever comes out. Now, this is okay...I mean, I don't think there's any reason for her to announce, "Hey, I used to be a prostitute." But Angela could use her past as a witness. I think it's wrong to keep the truth from Leigh, and that was never resolved. Leigh is her best friend and was concerned about Angela. Leigh had the right to know what the trouble was...It would have been nice for the author to have written a sentence that Leigh knew the truth...

And the "never been kissed" is interesting. I had a drama teacher in high school tell us that a prostitute didn't kiss her clients, but I always wondered...I guess it's true!

The author took a very dirty and sinful subject and turned it into something beautiful. I think she did a GREAT job!