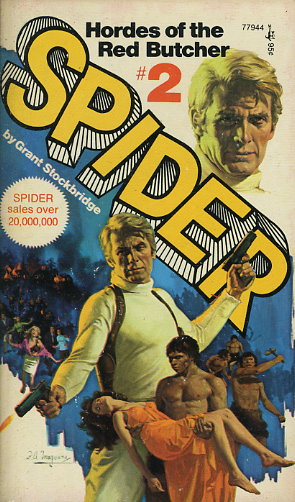 Death Must Be His Ally

Spider was the only survivor of a horrifying slaughter, as beast-men turned the turbo-train into a gory shambles. He had grappled man-to-beast with these subhuman killers and felt the punishment of their staggering strength and deadly primitive weapons.

Spider knew he had to discover the identity of the brilliant but criminal genius who directed these dreadful creatures before they could sweep across the country, wreaking random havoc like the hordes of Attila the Hun,.

But still their legions grew; still they multiplied, disrupting a nation, terrifying a people....
Reviews from Goodreads.com