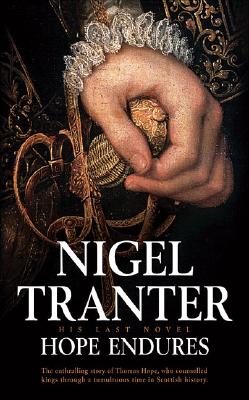 Sir Thomas Hope's life unfolded in an age of change, violence and upheaval in Scotland.

The son of an Edinburgh merchant, Hope had a spectacular beginning to his career: at the age of seventeen, before he had even finished his legal education, he travelled to France to triumph in his first court case and caught the attention of his young king, James VI. It was the beginning of a life at the heart of the government of Scotland.

From James VI and I to Cromwell, from John Knox to Montrose, Lord Advocate Hope was a rock in a fast-changing world. He witnessed the reigns of Charles I and Charles II, the founding of the East India Company, affairs of state and affairs of the heart, matters political and diplomatic. No dry-as-dust lawyer, he was a friend as well as an advisor to the three kings he served.

This is the last novel Nigel Tranter completed before he died in January 2000. His readers will recognise some of the characters and the places he chronicled in his earlier novels. But this is also a story of a very real man and his family, brought vividly to life by Nigel Tranter's compelling storytelling and his fascinating insights into Scotland's history.
Reviews from Goodreads.com