Hope Against Hope — Susan B. Kelly 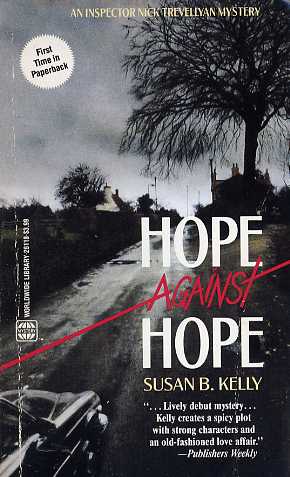 DEATH IN THE FAMILY

Aidan Hope is bludgeoned to death in his hotel room in the hamlet of Little Hopford. The prime suspect is Alison Hope, the victim's cousin, a brash, beautiful, wealthy businesswoman who inherits sole ownership of a lucrative software business. Alison maintains she bought Aidan out years ago. So why had Aidan suddenly appeared to claim his rights and his money?

Fighting his growing desire for the red-haired Alison, Detective Inspector Nick Trevellyan undertakes the investigation. Alison has no alibi . . . and every reason to have killed her cousin. She can't prove she bought him out. But as Aidan's unscrupulous past comes to light, ane a second body turns up, Trevellyan begins to hope that Alison is innocent... although that may mean she'll be the next to die.
Reviews from Goodreads.com