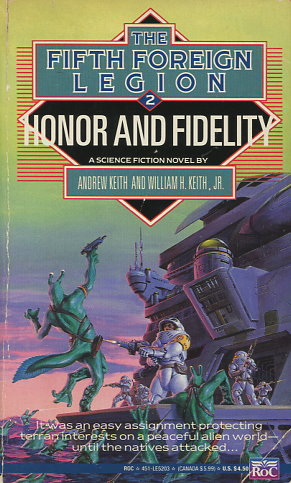 had once been a base belonging to the alien Toel, sometime allies of the defeated enemy of the Terran Commonwealth. Now the Sandcastle housed the troops of the Fifth Foreign Legion, sent to this water world on the fringe of Earth's expanding empire to protect the interests of Seafarms Interstellar, a powerful Terran corporation.

At first Captain Fraser thought the biggest problem he'd have was keeping the legionnaires from getting too bored. But that was before the Free Swimmers, the nomadic ocean clans, attacked and nearly overran the Sandcastle. Suddenly, the Fifth found themselves facing a seemingly unstoppable native army equipped not only with the crossbows of their own planet but with high-tech, off-world weapons which just might prove the doom of both the Fifth and the Corporation civilians they'd sworn to give their lives to protect!
Reviews from Goodreads.com