Homicide My Own — Anne Argula 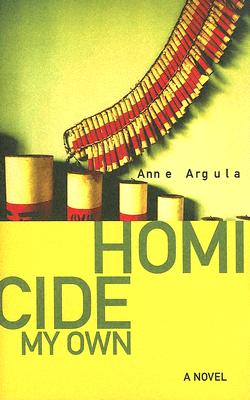 Homicide My Own resides in that strange and fascinating land between mystery fiction and detective fiction, adjoined with the mystique of philosophy and Native American customs. It's a story of two slog-bottom cops from Spokane, Washington, who are assigned to what appears to be a routine mission: They're to go to an Indian reservation on the Northwest coast and pick up a man who's being held for kidnapping a teenaged girl. Once there, however, one of the cops (given the unusual moniker of "Odd") becomes obsessed with a decades-old murder, the only unsolved murder in the island's history, and he really doesn't want to head back to Spokane until he's found some resolution. His partner, Quinn, the acid-tongued menopausal wife of a decent and boring pharmacist (and the novel's narrator) finds Odd's behavior rather amusing at first, but then finds it to be much more than amusing. In an intriguing character study, Anne Argula has developed a novel that not only forces a reader to keep turning the pages; it goes so far as to force the reader to look at life â€" and death â€" in a new and uncharacteristic way. Pick this book up at your own risk. You may find yourself having lost not only the next few hours but also your sense of confidence in, as one might say, "the world as you know it."
Reviews from Goodreads.com