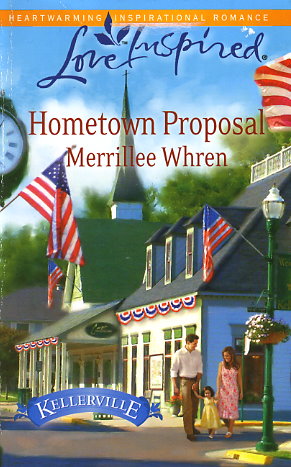 Before single father Seth Finley became a full-time dad -- and a Christian -- he wasn't exactly responsible. But now he can't seem to convince his former girlfriend that he's changed. Nothing is more important to Seth than family, faith and love. And since he's found Elise Keller again, he has another shot to show her what kind of man he truly is. A man who'll love, honor and cherish her the way she always deserved. But will the once-burned, twice-shy Elise ever accept his hometown proposal?
Reviews from Goodreads.com

First of all, let me start off by saying the title's a bit misleading. I'll just leave it at that.

I really, really, really liked the new Seth. He was sweet and loving and was really trying to live the Christian life. He loved Elise and moved to Kellerville in hopes of renewing their relationship. But Elise wasn't too sure she wanted to have anything to do with Seth. He had hurt her pretty deeply...

I can understand why they both were the way they were. I thought the story line was a bit dull, but it picked up a bit in the last chapter. Fornication was mentioned and dealt with in a Christian and unjudgmental way in this book, which made me happy.

Olivia was a cutie! I also enjoyed reading updates on Juliane and Lukas' relationship as well.