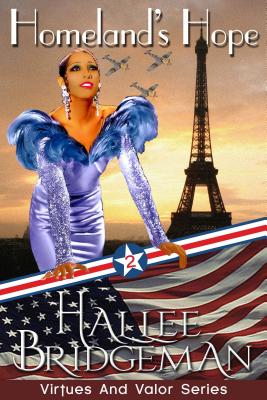 The exciting Virtues and Valor serialized story continues with book 2.

Stage and screen legend VIRGINIA BENOIT performs for standing room only crowds in her adopted home of France. When the Nazis roll into Paris, she flees to Casablanca, taking the heart of a enemy General with her. While in there, Virginia devises a plan to use her position, talent, and influence with the high ranking Axis officer to aid the Allied cause.

Virginia joins the Virtues team, assigned the code-name HOPE. Her keen mind trains in the craft of espionage. After staging a rift with the US, she returns to Paris, hiding undercover in plain sight, and spies on the enemy. All is well until the Third Reich imprisons the Virtues wireless operator, code named Temperance.

As the Virtues engineer a plan to rescue Temperance from the Gestapo's clutches, Virginia takes to the stage to play her part in the daring mission. Will the murderous racism of the Nazi High Command prevent her from fulfilling her duties?

In 1941 Great Britain a special war department assembles an experimental and exclusively female cohort of combat operatives. Four willing spies, a wireless radio operator, an ingenious code breaker, and a fearless pilot are each hand-picked, recruited, and trained to initiate a daring mission in Occupied France. As plans are laid to engineer the largest prison break of Allied POWs in history, the Nazis capture the Virtues' radio operator. It will take the cohesive teamwork of the rest of the women to save her life before Berlin breaks her and brings the force of the Third Reich to bear.

Some find love, some find vengeance, and some discover the kind of strength that lives in the human heart when all they can do is rely on each other and their shared belief. Courage, faith, and valor intersect but, in the end, one pays the ultimate price.
Reviews from Goodreads.com