Home Is Where the Bark Is — Kandy Shepherd 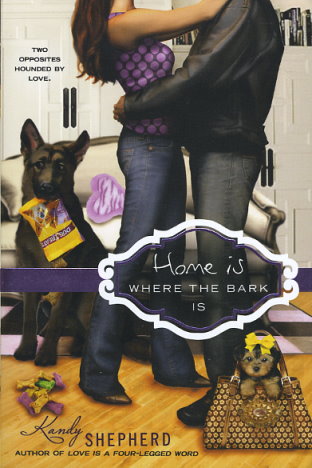 Former model Serena Oakley will take puppy playdates over glamorous parties any day, which is one reason why she's swapped her stilettos for Birkenstocksand opened Paws-A-While, an upscale doggy day care and spa in San Francisco. When a ruggedly handsome client walks through her doors, clutching a purse-sized Yorkie-poo and only barely convincing when it comes to canine credentials, instinct tells her to be wary -- despite her instant attraction to him.

Undercover investigator Nick Whalen has followed a series of identity frauds to Serena and is determined to dig up the secrets he's certain she is hiding. Despite their mutual distrust, Nick and Serena find themselves bonding over an injured, orphaned dog with a serious junk food habit. And soon they're arousing more than just suspicions.

Nick begins to wonder if one gorgeous, possibly criminal woman and one sad-eyed mutt could show him what he's been missing out on all his life, while Serena longs to let down her guard. But when Serena's safety is threatened -- and their future together put in jeopardy -- the pair must trust in love and loyalty to thwart a danger that's circling too close to home.