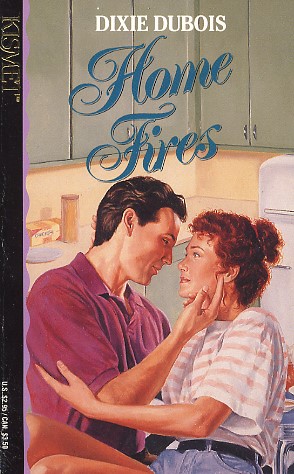 THE HUNGER IN HIS EYES

When Leara left Columbus, Indiana, at the age of eighteen, she was running for her own survival. She'd learned that life wasn't worth living in her father's house, under his iron hand. Her only regret was that Garreth Conroe wouldn't join in her escape. Dark-eyed, sensitive Garreth had always been the boy of her dreams, the one love who would haunt her forever.

Ten years later, Garreth was the last person Leara expected to see when she returned home to settle her father's estate. But there he was browsing through the aisle of the grocery store, looking just as darkly handsome as the day she'd left town. The innocent boy was now a worldly architect, a man with a full-grown hunger that burned golden in his eyes.

Over the years, Garreth had dreamed of the tiny woman with unruly copper curls. Now that she was near, all the heat and passion of those summer nights by the lake came rushing back with a new intensity. So much had changed since then, but Garreth wasn't about to let a few obstacles keep them apart. Leara had slipped through his fingers once before, but Garreth Conroe was a man who never made the same mistake twice!
Reviews from Goodreads.com