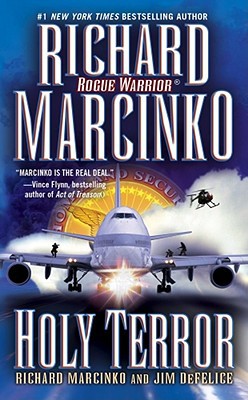 Nothing and no one is sacred as the Rogue Warrior® smokes out a terrorist network with plans to turn the Vatican into the world's largest Roman candle. The former SEAL commander takes his first shots at a NATO conference in Rome, where he caps off his blistering antiterror speech with a helpful visual aid, eliminating a "waiter" and playing volleyball with a live grenade. As Demo Dick and his team trail terrorist kingpin Saladin, the manhunt pulls Marcinko into tracking stolen nukes in Sicily, facing down a predator in the jungles of Thailand, and flying on a prayer aboard a hijacked jet. Marcinko's mission is one final, explosive showdown with the bad guys -- and there will be hell to pay.
Reviews from Goodreads.com