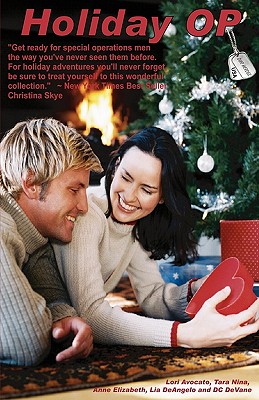 THE STOCKING by DC DeVane
Marcy Grayson had been in love with Paul Callahan for years. She'd dreamed of a proposal, a ring, and a happily-ever-after since the day she first met him. The winter holidays always brought out the romantic in her, and in him, but how could she possibly have guessed that love - and a "Proposal Paul Style" - would involve a dog, a rubber raft, and the Army Rangers.

TIED WITH A BOW By Anne Elizabeth
According to EOD Specialist Captain Devin Walds, love and bombs have a lot in common. First, it is vital to know the inner and outer workings of both. Second, understanding when and how to get the job done is absolutely crucial. Third, believing it is worth risking your life is mandatory. For Kathryn Marie Pente, he would do anything. From the first moment he saw her, he knew she was extraordinary. It wasn't just her unusual artistic talent or her daring beauty, this was a woman who fought for what was right, and she was worth living...and dying for.

CHRISTMAS TO THE RESCUE By Lia DeAngelo
Petty Officer Annabelle Foster lives her job as a Coast Guard Rescue Swimmer stationed in Kodiak, Alaska. Until she meets the most delicious sugar cookie snowman ever created, and its equally decadent creator, Food Service specialist, Tony Lombardi. Little does she realize that one snowy mission on a patrol boat decked in lights and holly will lead to one romantic treat after another, and the sweetest rescue of all -- her own.

ALL I WANT FOR CHRISTMAS IS A MARINE by Tara Nina
Locate, identify, observe, and report that's what Staff Sergeant Mitch Sinclair's squad of Force Recon Marines did best. When the objective shifts, it becomes an extraction of a hostage Mitch will never forget and it's up to him to fulfill her Christmas wish.

MISSION MISTLETOE by Lori Avocato
When an Air Force nurse falls out of a helicopter (don't even ask!) she thinks that's the worse that could happen. That is, until the paratrooper who parachutes into the desert to save her is none other than the cocky-as-hell guy with jet black hair, Newman blue eyes, and teeth she's convinced are Da Vinci porcelain -- because no one was born with such a perfect smile -- she's been calling "Slick." Sure, he's a damn good looker, but he'd been following her around the base for weeks -- and now falls from the sky with a sprig of Mistletoe in his pocket!