Hold On To Forever — Maria Geraci 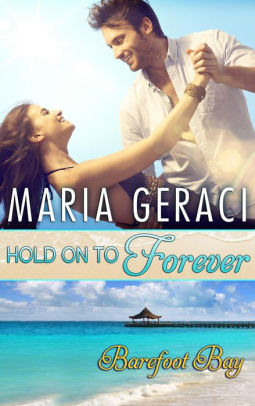 Share:
Hot, rich and powerful meets his match at a destination wedding in Barefoot Bay!
Jack Martinez has the world at his feet. Heir to Florida's most lucrative personal injury law firm, women love him and insurance companies quake at the mention of his name. But Jack harbors a secret wish. He wants to start a small practice of his own, away from the limelight, and he's counting on his younger brother to finish law school and take his place at their parents' firm.
Felicity Reed wants to save her family's dying advertising company. Landing a big client like Jack would be a dream come true, but she's made a pitch and he's already shot her down. Which makes it awkward when her baby sister and Jack's younger brother decide to do a destination wedding at the Casa Blanca Resort in Mimosa Key.
When the soon-to-be newlyweds announce that they're deferring law school, Jack offers Felicity a deal; help him convince the young couple to stick to their original plan and he'll give her PR firm a slice of his business. Which seems easy enough until Felicity finds herself actually falling for the arrogant ambulance chaser. Now she's going to have to make a choice between family loyalty or a chance on a forever love.