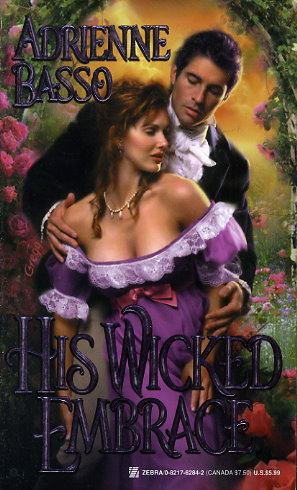 ONE KISS IS ALL IT TAKES

Damien St. Lawrence, the eighth Earl of Saunders, couldn't believe his eyes. Though the woman standing before him bore a striking resemblance to his late wife, it was her familiar violet eyes that haunted him while stirring his senses to an irresistible longing.

FOR A LADY OF VIRTUE

Miss Isabella Browning was both frightened and intrigued by her new employer. Rumors and scandalous tales about him were rife, but Isabella was drawn to Damien's tender concern for his children-and the temptation of his arms around her.

TO BECOME A MISTRESS OF DESIRE

Ignoring her escalating passion for Damien, Isabella threw herself into her work, trying to keep her two unruly charges out of mischief. Yet with each passing day, Isabella found herself succumbing to Damien's spell-until they shared one unforgettable night of ecstasy. But just as her trust grew, Lord Thomas Poole, Damien's brother-in-law arrived, determined to make Isabella his by exposing Damien's dark secrets. Soon the shocking truth about Damien's wife was revealed-a truth that could destroy their love.or prove that it could overcome anything.
Reviews from Goodreads.com