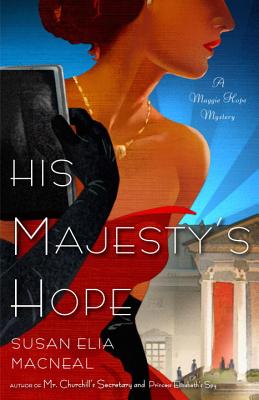 For fans of Jacqueline Winspear, Laurie R. King, and Anne Perry, whip-smart heroine Maggie Hope returns to embark on a clandestine mission behind enemy lines where no one can be trusted, and even the smallest indiscretion can be deadly.

World War II has finally come home to Britain, but it takes more than nightly air raids to rattle intrepid spy and expert code breaker Maggie Hope. After serving as a secret agent to protect Princess Elizabeth at Windsor Castle, Maggie is now an elite member of the Special Operations Executive -- a black ops organization designed to aid the British effort abroad -- and her first assignment sends her straight into Nazi-controlled Berlin, the very heart of the German war machine. Relying on her quick wit and keen instincts, Maggie infiltrates the highest level of Berlin society, gathering information to pass on to London headquarters. But the secrets she unveils will expose a darker, more dangerous side of the war -- and of her own past.
Reviews from Goodreads.com

If it wasn't for the ending of this book I think this book deserved a 5, but the ending seemed rushed and off track to me. I was disappointed with the way the unflappable Maggie reacted to the completion of her first spy mission. The book was extremely fast-paced and had a really tight plot up until the last 5 or 6 chapters. The time is 1941 and WWII is in full play. At the beginning of the book we see Maggie, just fresh out of her spy school training taking her first mission into Nazi-run Berlin. She is tasked with two rather straight-forward tasks, and has no problems completing them once she is dropped into Germany. But then Maggie being Maggie, she discovers another line of inquiry and takes a position with a highly placed Nazi bureaucrat. She manages to get some valuable information from this man, but she puts herself in grave jeopardy which causes her to run from the house late at night before the SS come to pick her up. And then she's on the run in war-torn Germany. This series is really very enjoyable, mostly because of Maggie's gutsy and audacious personality. There is nothing that fazes her and she does whatever is necessary to complete her task. This attitude and her quick thinking carried the plot right through until the ending where we see Maggie have a very uncharacteristic breakdown. It certainly sets things up for an interesting fourth book in the series.