His Haven — Harper A. Brooks 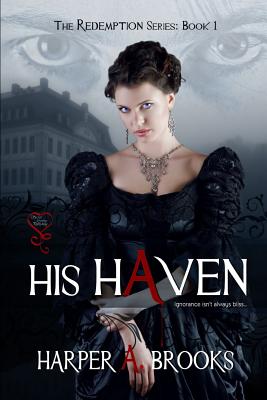 Handsome and diligent Avrum Brenin should have died in the fire with his mother and older brother. Instead, he is saved by the powerful and wealthy immortal, Lord Henri. Placed under his care, Avrum shares in his world of endless splendors. He must do one thing in return: look after Haven, a human and Lord Henri's newest rescue. The simple task proves to be more complicated than it seems. Haven is disobedient, ungrateful, and hostile, yet she is beautiful and mystifying at the same time. One night, when Avrum stumbles across Haven barely clothed and bound at the wrists, the world he has trusted in unravels before his eyes. He soon discovers that no one—from Lord Henri and Haven to his closest friend, Lysander—are who they seem to be. Now faced with the truth, will Avrum choose to surrender to the man who rescued him, or will he have the courage to save the woman who captivated him?
Reviews from Goodreads.com