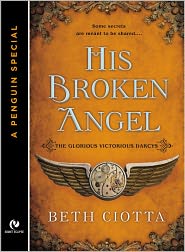 From the author of Her Sky Cowboy comes a sexy new novella about rebellion, redemption, and the healing powers of love and tolerance amid budding global chaos.

Doc Blue has never had it easy. Born a Freak, the offspring of a Vic -- a native Victorian -- and a Mod -- a time traveler from the future -- he's lived on the fringes of society, hiding his true identity and preternatural healing abilities from even his closest friends. His brief support of the Freak rebellion has only left him with even more problems, losing him both his job and one of his greatest allies, the Sky Cowboy, Tucker Gentry. So when Tuck's kid sister, Lily, ends up blinded in an air skirmish on her way from America to England, Doc jumps at the opportunity to be the one to rescue her and use his powers to mend her wounds.

Curing Lily proves harder than anticipated, and Doc realizes that to restore her sight he will have to spill his biggest secret and embrace his Freak nature like never before. But, with Lily's help, Doc may be able to reach the full potential of his abilities, heal Lily's broken heart, and learn, finally, how to open his.
Reviews from Goodreads.com