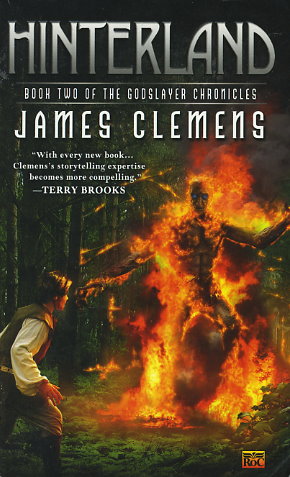 Following the Battle of Myrrwood, an ominous artifact is discovered: a skull, twisted and corrupted by dark Graces. But it is neither Man nor beast that has been tainted so foully. It is the skull of a god--and the work of the Cabal, a faction of daemonic naethryn intent on destroying the Nine Lands. Tylar, former knight and new regent to Chrismferry, must unravel the mystery of the skull before all of Myrillia is threatened.

But the Cabal is not the only danger. To mend a growing rift at Tashijan, Tylar returns to the Citadel of the Shadowknights and regains his knighthood, but it is a trap. Ravening forces out of Ice Eyrie launch a siege against Tashijan, ambushing Tylar and the Shadowknights. More terrible is the threat rising from the bowels of the Citadel itself--the black ghawls, an order of daemonic knights whose Grace has been corrupted.

To save the Nine Lands, Tylar must enter the hinterlands, the desolate territory where rogue gods roam and dark Graces flow...and from which no Shadowknight has ever returned.
Reviews from Goodreads.com