Highlander of Mine — Red L. Jameson 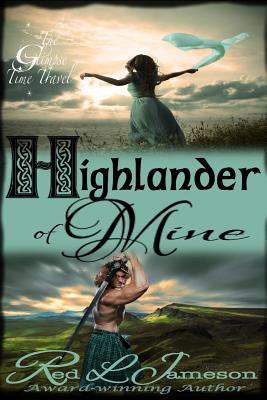 Book Two of the Glimpse Time Travel Series Trickster muse sisters, Clio and Erato, kidnap genealogist Fleur Anpao and dump her in the seventeenth century. Even though Fleur has never been to Scotland, let alone the Highlands, and feels like a modern-day fish out of an ancient loch, the muses have a plan. What it is remains to be ambiguous—they are mischievous muses, after all, and can’t just tell her. Though the logical genealogist wants nothing more than to return home, there’s something about this time and rough land that feels somehow familiar. And there’s something about Duncan MacKay—so strong, so brutally handsome, and so distracting. As a mercenary for long years, Duncan has seen many things. But never in his life has he seen the likes of Fleur: more beautiful than any woman he could have imagined. It doesn’t matter she insists she’s from another time, or that she’s too far out of reach for a common man like him. He’s drawn to her intelligence and wicked sense of humor. However, Cromwell’s reign threatens anarchy, clan rivalries reach a peak, and a laird’s younger brother vies for her attention. He can hardly protect her from his county’s bedlam, let alone convince her he’s the better man. And if he does, will the bonny time traveler stay with him? Making matters worse, a god wreaks havoc, or has fun as he calls it, with Clio and Erato’s mortals. The two firecracker time stewards might have to set down their margaritas for this glimpse!
Reviews from Goodreads.com