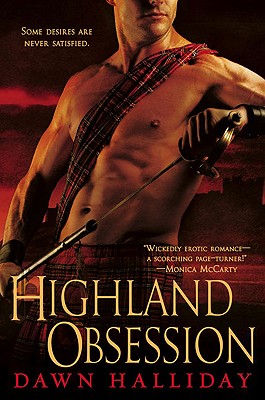 In the Scottish Highlands, two warriors are about to clash over a woman of passion...

They were the unlikeliest of friends debauching their way through London: The Earl of Camdonn, a nobleman of vast wealth and power, and Scottish laird Alan MacDonald, a respected Jacobite with ambitions of his own.

But their friendship is destroyed when Alan marries the beautiful Sorcha Stewart--only to witness Cam kidnap her from their bedroom. Then Alan learns the truth: his bride was not an innocent. She took a lover before him--his friend--who taught her the ways of pleasure.

Now, Alan will do anything to get his wife back. Cam fights to redeem his honor, even as he refuses to give up his desire. Torn between love and duty, Sorcha must watch as the two men she desires go to war over her. And when the battle lines are drawn, all three lovers are lured into a triangle of forbidden passions...
Reviews from Goodreads.com

This book was a huge disappointment compared to the reviews. There is no way a self respecting highlander would not kill anyone who tried and suceeded to take his wife. Then they have a 3 way. Not bloody likely. Then she thought that would heal them, come on, get in the real world. It could only make the bad get worse.