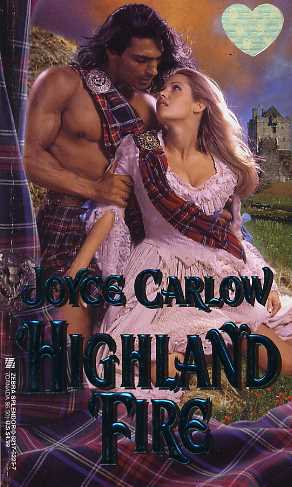 As the Scottish clans prepare to battle England for sovereignty, two flame-haired Highland beauties-born twins, orphaned and separated at birth-are haunted by the eerie vision of a sister who seems more dream than reality. In HIGHLAND FIRE, we follow the story of one of these sisters, a spirited lass who seeks her destiny in a world of treachery and passion.

A HIGHLAND LASS
Though her relatives forced her into an arranged marriage with Bran Chisholm, Edana MacLean vowed never to love her betrothed, no matter how handsome he might be. Her heart had already been stolen by a darkly seductive highwayman-the infamous Raven- who offered the irresistible challenge of certain danger and searing desire.

A SCOTTISH ROGUE
Bran's stubborn bride refused to declare her love for him-claiming she preferred a masked brigand. Yet when he took her in his arms, the fiery beauty returned his burning stolen kisses, unaware that he alone knew the Raven's secrets. Now, as Scotland gathered its forces to make a stand against British might, Bran would be cast in the deepest dungeon-driven to escape by the memory of feverish nights with his Highland lass, and the promise to possess her very soul.
Reviews from Goodreads.com