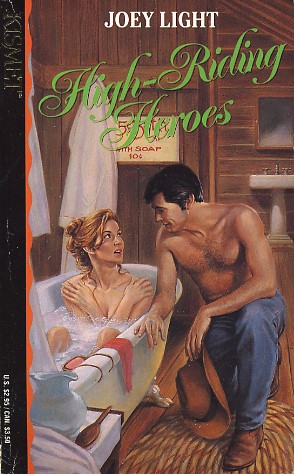 It was a most unusual inheritance. Instead of cash, Victoria Clay was willed one half of Glory Town, a restored Oklahoma village where tourists gathered to experience the excitement of the wild west. From the stagecoach bouncing down Main Street to the gunslinging cowboys in the saloon, Glory Town's spirit captured Victoria's heart. She was determined to abandon the demure world of Virginia society and become a full-fledged cowgirl.

Then the ultimate cowboy rode into town. With a body as hard as rock and eyes that sparkled like black diamonds, Wes Cooper resembled the gunslingers who wowed tourists every day-But Wes was the real thing. He'd been hired to teach the men how to shoot and rope and ride, and he wasn't going to leave Glory Town till his job was done.

Victoria resented his every decision. She knew he saw her as a spoiled brat, a rich girl dressing up in ruffled skirts and starched bonnets just for kicks. But somehow, Glory Town had gotten under her skin. Like the original settlers on the frontier, she was going to stand her ground and see that Glory Town survived -- even if it meant a showdown with a dark-eyed cowboy!