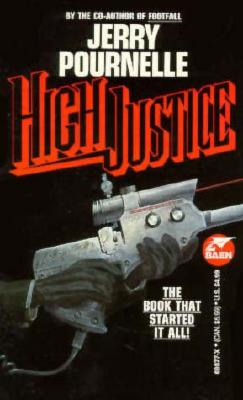 "High Justice" is a collection of science fiction short stories.

A major part of the background of these stories is the final fall of the Welfare States; Russia is never mentioned, and the US is downsliding due to inflation and political corruption. In short, Earth's civilization is about to collapse under the weight of its bureaucracies, but a new civilization is being built by determined multinational corporations.

The stories were published between 1972 and 1975, and reflect Pournelle's concerns with the effects of environmentalism, welfare states, and high taxes on the ability of people to make advances in technology. At that time the Great Society, America's version of the Welfare State, was not even 10 years old.

Each short story concerns itself with the problems facing large technological tasks in the near future. These include plutonium fuel breeding, deep sea thermal power, large scale food cultivation and access to fresh water. The protagonists are the agents of multinational corporations -- engineers engaged in large scale projects and troubleshooters engaged in protecting said engineers. Though economic competitors are mentioned in passing, the primary antagonists are political -- untrustworthy governments and covert operatives acting on their behalf.
Reviews from Goodreads.com