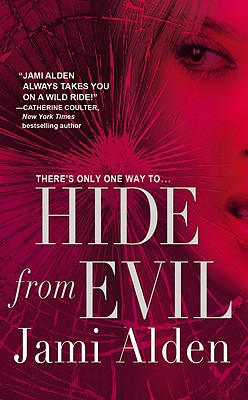 Like a chess master, he carefully weighs his next move . . . advancing slowly until he is sure he can capture his helpless pawn. For in his mind, there's no way to . . .

HIDE FROM EVIL
Sean Flynn should feel lucky he's alive. But a betrayal by a close friend-and two years on death row-has left him feeling only numb. When his conviction was overturned, Sean retreated to a quiet woodland cabin, far away from prying eyes. There, he believed, the past couldn't come back to haunt him . . . until she showed up.

Overcome with guilt, Deputy Prosecuting Attorney Krista Slater can't forgive herself for convicting an innocent man. But when another brutal murder reveals chilling, new facts about his case, she must turn to Sean for help. She's ready to face his anger, but the desire in his eyes ignites a need she's never felt before. Shadowed by danger, Sean and Krista uncover a twisted maze of deception and betrayal-all under the dangerous gaze of a cunning mastermind who will do whatever it takes to keep his evil secrets safe.
Reviews from Goodreads.com