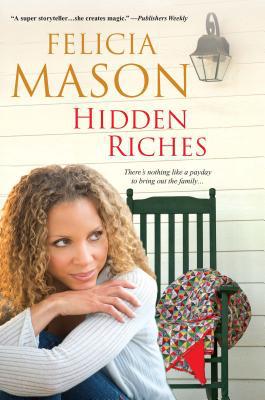 Award-winning author Felicia Mason introduces us to a respectable Southern family turned upside-down by grief. . .and a hilarious and sometimes undignified search for a huge inheritance. . .

After a lifetime spent scrubbing and mending for others, Ana Mae Futrell has passed away. Her siblings have reluctantly returned to their North Carolina hometown to bury the older sister they never really bothered to know. For instance, they didn't know she'd won big on a lottery ticket. Or that she had a son. But back to the money--Ana Mae's millions will go only to the person who can interpret the clues she's left behind in a quilt. Should they all fail, the fortune goes to Diamond Jim and Baby Sue--Ana Mae's cats--and a Reverend with whom Ana Mae shared a "special" relationship. . .

Ana Mae's two sisters and brother hadn't really thought about Ana Mae in years, but now, with bills to pay, marriages on the line, and secrets ready to spill, she's all they can think about. And as the race to win begins, everyone involved finds there's more to gain than money. Because they're each going to learn a little something about Ana Mae--and a whole lot more about themselves. . .
Reviews from Goodreads.com