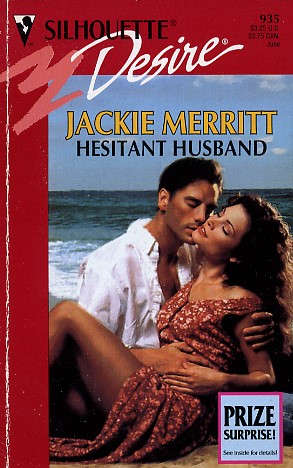 WILLFUL WOMAN
Kim Armstrong had found the husband of her drams. Mitch Conover was rugged and sexy -- but too darn stubborn and proud to admit his obvious attraction. But Kim had a plan to get Mitch into her bed -- and her life -- permanently.

HARD-HEARTED MAN
Mitch Conover was determined to succeed at Armstrong Construction by nothing less than hard work and plenty of it. Then he met Kim Armstrong -- the most enticing female he'd ever laid eyes on -- who turned out to be the boss's daughter! Mitch swore she was the last female he'd ever fall for. But was his ironclad willpower any match for one willful, beautiful, marriage-minded woman?
Reviews from Goodreads.com

Hesitant Husband is the 17th romance novel by American author, Jackie Merritt. Mitch Conover is happy in his job at Armstrong Paving and Asphalt, determined to work his way up in the company on his merits. Then he meets Kimberley Armstrong, the boss’s daughter: the attraction is immediate, on both sides. But while Kim, with her own interior design company, is single-minded about being with him, Mitch is hesitant: he won’t tolerate even a hint of favouritism in his job, and is sure her father’s impartiality will disappear if their relationship is made public. But deception does not sit well with either of them. A sexy romance with strong characters, that touches on trust, honesty and pride. Enjoyable.