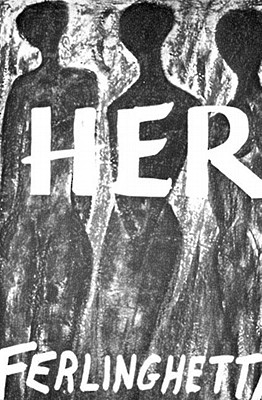 "A surreal semi-autobiographical blackbook record of a semi-mad period of my life, in that mindless, timeless state most romantics pass through, confusing flesh madonnas with spiritual ones." This is how the author describes this extraordinary expatriate novel.

"To all those who have for several years sought to discredit the new American literature, Lawrence Ferlinghetti has just dealt a most powerful blow," wrote French critic Pierre Lepape in 1961 when Her was published in France as La Quatrieme Personne du Singulier. Calling it "a masterpiece of the young American novel," Lepape declared it was "the confirmation of a great American writer who, in the hall of American literary glories, takes the place left vacant by the death of Hemingway." Lepape went on to speak of the "incredible verbal virtuosity" by which the reader is led through this "laby-reve," and it is this image of the "labyrinth-dream" which relates Her to the anti-novels of the young French school of Robbe-Grillet and Butor.

Being thus very far from the kind of novels produced by Ferlinghetti's immediate contemporaries (whether Beat or academic) this book has met with little but bafflement among American critics. With well over 50,000 now in print Her nevertheless continues to make its own way.