Hers the Kingdom — Shirley Streshinsky 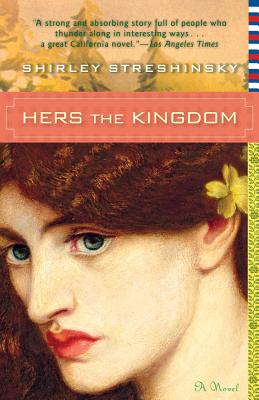 When beautiful young Willa Reade first saw the wild California coast called the Malibu, she knew she had come home. It was here, with her handsome aristocratic husband, Owen, and her crippled sister Lena, that Willa would build her empire. -- The Malibu, where the mountains meet the sea. A sprawling ranch pounded by the raging Pacific, it would grow to shelter the generations of a mighty California dynasty.

Willa's dynasty. Through the boom days of the railroads, from the dance halls of San Francico, to the revolutionary fires of China, through the bitter losses of war and the terrible secrets of a forbidden love, Willa would fight. For pride, for passion, for her children and her men...for the vast cherished acres of the Malibu, her kingdom, her home, her destiny.

Like Gone With the Wind and The Thorn Birds, a once-in-a-decade story that will sweep you away into another woman's life!
Reviews from Goodreads.com