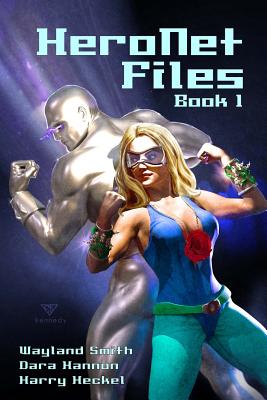 This book is written for age 14 and up and may be considered inappropriate for children due to strong language, violence, and adult themes.
An anthology of novellas by Wayland Smith, Dara Hannon, and Harry Heckel.
HeroNet Files Vol. 1 contains three novellas about new superheroes and how they learn to come to grips with their powers and responsibilities. And each other.
In the first novella, Argent and The Cobalt Rose by Wayland Smith, Laura tries to start her career as the Cobalt Rose and winds up with the mysterious loner, Argent, as a mentor. Argent discovers that he has at least as much to learn about life from her as she has to learn about heroing from him.
In Murphy's Hero by Dara Hannon, Tiger Iron of the world-famous superteam, the Wardens, must investigate a questionable new hero, Murphy, who may be stealing money from the drug dealers she stops.
Finally, in Hidden Strengths by Harry Heckel, when Scott develops his own powers, he joins an underground superhuman fighting league and finds himself losing control of his life. Meanwhile, the gladiatrix Diamond decides that he is her hope to escape the brutal world of powered combat.
Reviews from Goodreads.com