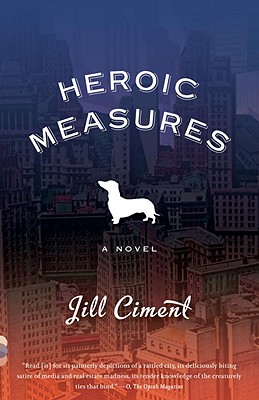 A gasoline tanker truck is "stuck" in the Midtown Tunnel. New Yorkers are panicked . . . . Is this the next big attack?

Alex, an artist, and Ruth, a former schoolteacher with an FBI file as thick as a dictionary, must get their beloved dachshund, whose back legs have suddenly become paralyzed, to the animal hospital sixty blocks north. But the streets of Manhattan are welded with traffic. Their dog, Dorothy, twelve-years-old and gray-faced, is the emotional center of Alex and Ruth's forty-five-year-long childless marriage. Using a cutting board as a stretcher, they ferry the dog uptown.

This is also the weekend that Alex and Ruth must sell their apartment. While house hunters traipse
through it during their open house, husband and wife wait by the phone to hear from the animal hospital. During the course of forty-eight hours, as the missing truck driver terrorizes the city, the price of their apartment becomes a barometer for collective hope and despair, as the real estate market spikes and troughs with every breaking news story.