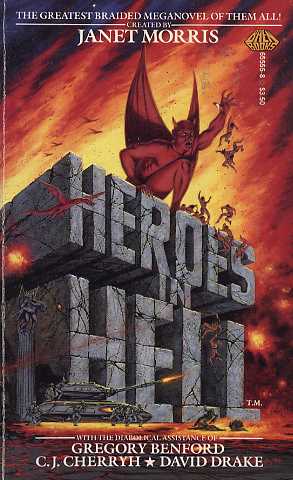 Alexander the Great teams up with Julius Caesar and Achilles to re-fight the Trojan War--with Machiavelli as their intelligence officer and Cleopatra in charge of R&R . . . Yuri Andropov learns to Love the Bomb with the aid of The Blond Bombshell (she is the Devil's very private secretary) . . . Che Guevara Ups the Revolution with the help of Isaac Newton, Hemingway, and Confucius . . . And no less a bard than Homer records their adventures for posterity: of course it's a fantasy. It has to be, if you don't believe in Hell.

But award-winning authors Gregory Benford, C. J. Cherryh, Janet Morris, and David Drake, co-creators of this multi-volume epic, insist that He-roes in Hell is something more: that if you accept the single postulate that Hell exists, your imagination will soar, taking you to a realm more magical and strangely satisfying than you would have believed possible . . .

WELCOME TO HELL
Reviews from Goodreads.com