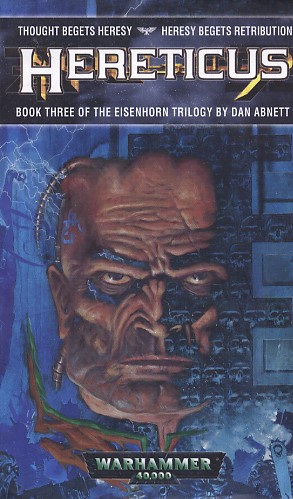 The other two mercenaries jerked round like lightning, one going for his sidearm, the other leaping at me with clawing hands. A slash of my sword bisected his head like a ripe fruit.

The corpse rolled off the car top into the darkness. I stood ready, Barbarisater twitching in my hands. The remaining Vessorine backed away, aiming a large calibre autopistol at me. The two of us could barely stand, such was the blizzard's windshear.

He fired once. I flicked the round away. He fired again, his feet slipping, and I made a parry that spat the bullet off into the darkness.

'My name is Gregor Eisenhorn. I am the man you have been paid to kill.'

ACROSS COUNTLESS worlds, the Inquisition pursues a - secret war against humankind's foullest enemies - the alien, the unclean and the unholy. When a battle with an ancient foe turns deadly, Inquisitor Eisenhorn is forced to take terrible measures to save the lives of himself and his companions. But how much can any man deal with Chaos before turning into the very thing he is sworn to destroy?
Reviews from Goodreads.com