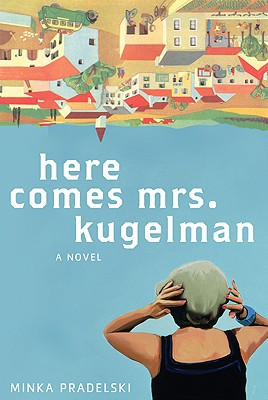 "Here Comes Mrs. Kugelman "is Minka Pradelski's enchanting novel of listening and telling, of the silence between Holocaust survivors and their children, and of the power of stories to mend broken bonds

When feisty young Tsippy Silberberg of the curious eating habits receives word from Tel Aviv that a distant aunt has left her a mysterious inheritance--an incomplete fish service in a battered brown suitcase--she decides to break her rigid routine and go collect it in person. But before she is even able to settle into her hotel room, an odd old woman bangs on her door and invites herself in. Her name is Bella Kugelman, and she is determined to talk.

And talk she does, with wondrous effect. Soon the room is filled with people--residents of the Polish town of Bedzin before the war, who now live on, if only in Mrs. Kugelman's stories. Flirtatious girls and sly shopkeepers, rich industrialists and a family so poor that their necks are bent over from looking for coins--in tale after tale, a town magically returns to life, even as its grim future looms darkly. And under the thrall of Mrs. Kugelman's words, Tsippy finally pieces together her aunt's strange bequest, as well as her own place in the story unfolding before her.