Heralds of the Storm — Andrew Bates 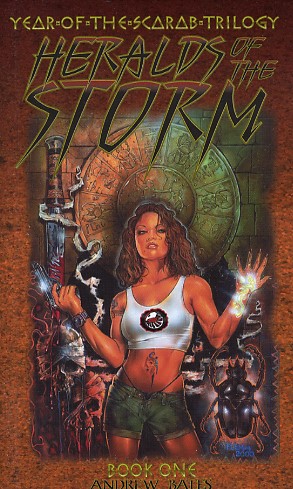 THE GHOST STORM RAGES
Drawn into a struggle against the forces of darkness, Thea Ghandour encounters an enigmatic figure who shares her same immodest goal: the ultimate destruction of evil. Maxwell Carpenter has tracked an entity of incredible power to an obscure temple in the heart of Chicago. Only with the aid of Thea and her fellow hunters can Carpenter hope to stand against its dark might.

AN ANCIENT FORCE AWAKENS
But Thea learns that Carpenter has not revealed everything--not about his actual goals, nor about the mysterious entity's true nature. Only by entering the formidable Temple of Akhenaton can Thea hope to discover the truth--and uncover a revelation that may change the world.

Heralds of the Storm is the first novel in the Year of the Scarab trilogy. This three volume epic reveals the rise of an ancient power that threatens to forever alter the World of Darkness... the immortal beings known as mummies.
Reviews from Goodreads.com