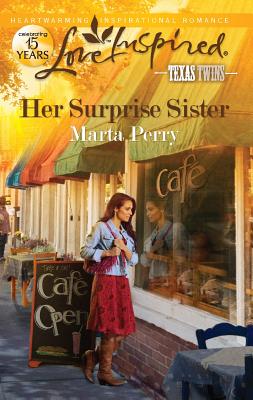 Imagine her shock when Violet Colby discovers she has an identical twin sister she never knew existed. Why her family was torn apart remains a secret no one can answer -- yet.

Hoping to develop a sisterly bond, Violet invites her sophisticated city twin to the Colby Ranch in tiny Grasslands, Texas. But when her sister's former fiancé arrives with questions of his own, country girl Violet finds herself drawn to handsome businessman Landon Derringer. And learns that true love requires faith -- and a heart as big as Texas.
Reviews from Goodreads.com

Her Surprise Sister by Marta Perry
Texas Twins Book 1
Violet Colby was minding her own business while sitting in a coffee shop when a man came up to her acting as if he knew her. One thing led to another and she soon was face to face with Maddie Wallace...a woman who looked identical to her. The two soon find out they are twins and the journey begins to find out what happened. Maddie’s dad is out of the country and can’t be reached and Violet’s mom is in a coma. Why the secrets and separation?

Landon Derringer had promised Maddie’s father and brothers he would protect her while they were gone. He had failed his own sister but wouldn’t fail Maddie. As identical as the two women were, Landon found himself seeing how different they were on the inside. As the mystery of their separation grows, so does his protective nature. He soon finds himself watching over both of them.

This was such a great story and the beginning of what seems to be an exciting series. We meet the first of the characters in this book and the beginning of the mystery. The people who can solve the mystery are not around to answer questions. The next book is Maddie’s story, Mirror Image Bride by Barbara McMahon, Book 3 is Carbon Copy Cowboy by Arlene James, 4 is Look-Alike Lawman by Glynna Kaye, 5 is The Soldier’s Newfound Family by Kathryn Springer and the final book will come out in December, Reunited for the Holidays by Jillian Hart. I’m looking forward to the rest of the stories and seeing the puzzle pieces come together.
**Received through NetGalley for review.
http://justjudysjumbles.blogspot.com/2012/01/love-inspried-authors.html

In the first of this six book series (The annual multi-author series), the mysteries for the whole series are set up. It starts with a woman traveling to see if she can find her missing father (without really knowing where to look - that's a bit far fitched). She just happens to run into the ex-fiance, of sorts, of a sister she never knew existed. This new sister happens to be able to drop everything and travel back to Violet's family ranch to try and get some answers. The mother was injured and is now in a deep comma.

The story actually started out really interesting. The first half of the book was so good and action-packed that I couldn't put it down. But the second half dragged. I liked the concept throughout the whole story. Jack, Violet's brother that she grew up with, is a jerk in this, leaving Violet alone to figure out the mixed up family they suddenly have. He only comes back after Violet calls and tells him to, but he still won't participate in any of the family decisions.

There's also a youth center that Violet helped set up at her church. Maddie, her new-found twin, get involved with it, as does Maddie's ex-fiance, Landon, who is now Violet's love interest. Drama happens at the youth center (and they never did resolve that), and among a couple of the teenagers there that acts more like a filler than adds anything to the story. I guess it was used to help with Landon's unresolved issues surrounding his late sister...

Anyways, the story and concepts as a whole were interesting and thoughtful. The book kept my interest through most of it. I do wish and engagement hadn't been announced at the end of the story. In no way is this couple ready for engagement after only knowing each other for one month...