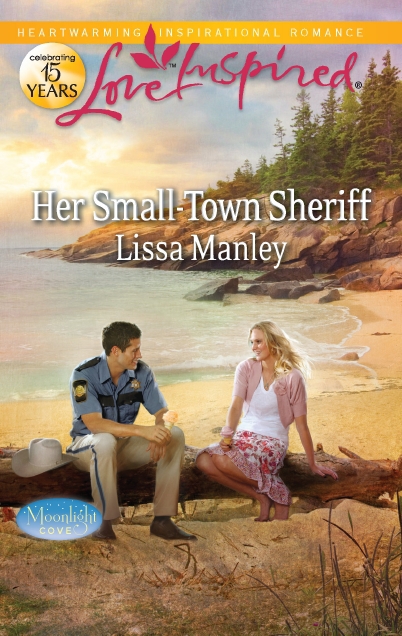 Calling the cops on a twelve-year-old shoplifter isn't what ice-cream parlor owner Phoebe Sellers would normally do. Yet it just so happens that the troublemaker's father is a cop. Unfortunately, Phoebe has no idea of the tragedy that's brought Sheriff Carson Winters and his daughter to Moonlight Cove...or the fears that plague him.

But she knows enough about broken dreams from personal experience. The shared bond with Carson soon has Phoebe believing in second chances. And wondering whether, with enough faith, she and Carson might be able to help each other heal.
Reviews from Goodreads.com

Both Phoebe and Carson have faced tragedy in their lives. One lost a fiance and the other a son and a marriage...and a grieving daughter. It was nice to watch these two help each other heal (even though I didn't agree that a male and female should have been put together on such an intense project like this). Phoebe's story was sad, but Carson's was so tragic! I could not even begin to imagine what went through his mind during those darkest moments of his life! The author made his re-telling of the events so real that it left me in horror and tears!

I was glad to see the romance , and the first kiss, happen like it did. So many times, a kiss happens and one ends up apologizing to the other and it ruins the whole scene. I'm glad that was missing here. The romance was slow, sweet, and honest. The pain each character felt (including Carson's 12 year old daughter) was so real and heart-stopping.

By the way, there is a blunder about the broken leg. Carson get's the cast on and three days later the doctor is planning on putting a walking boot on him in a week? I don't think so! Having a son who's currently recovering from a fractured ankle and is in a walking boot, I guarantee it doesn't work that quickly...

This is a sweet story and worth your time to read!