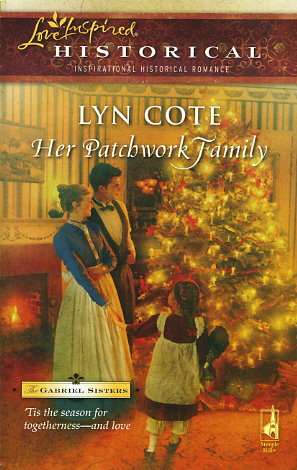 Christmas is for families...

And Felicity Gabriel intends to build a family right away When she inherits a mansion, she decides to turn it into a home for orphans. But her first charges test her resolve. One child is a thief, suspicious of her kindness. The other is the local judge's traumatized daughter.

Broken by war, Judge Tyrone Hawkins is devastated when his little girl runs from him to Felicity. But Felicity's courage despite the town's scorn for her orphanage and her caring way with his daughter restore his lost faith. Now he wonders if they all can find the family they seek...just in time for Christmas.
Reviews from Goodreads.com

This book captured my interest almost from the beginning and kept it through the entire book. Several characters play a vital role in knitting this story together. This book takes place after the Civil War. The country is still in an upset and there are many people still hurting - including children. My heart went out to Camie, Judge Tyrone Hawkins' daughter. She lived in fear of something that Tyrone cannot figure out, and she would never look at him. But when she meets Felicity Gabriel, her whole world changes.

Felicity is seen as a strong woman who believes men and women are equal, but her strong personality does not take away from Tyrone's. Throughout the book, I rooted for these two as their love for each other grew. There was something dark happening in the town - a sub-plot that left me feeling sorry for children who were so unprotected back then! The truth about why Camie acted the way she does was heart-breaking, but it was nice to read how she evolved from her darkness.