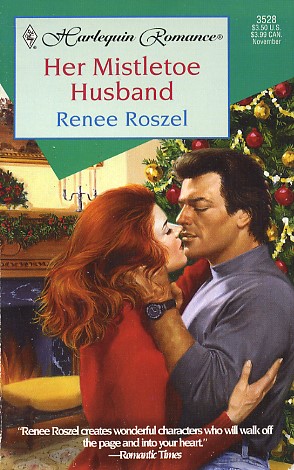 His kisses were irresistible

Alex D'Amour was an unexpected--and decidedly unwelcome!--guest in Elissa Crosby's home. Not wanting to spoil the Christmas mood for her two younger sisters and their families, she asked Alex to pretend they were friends. But he got carried away by his part and what her sisters actually saw was Alex--the affectionate lover! Had independent Elissa finally met her match?

Only she knew that Alex was not wanting her so much as her beautiful home. But under the spell of the Christmas mistletoe--and Alex's magical kisses--miracles could happen....

Her Mistletoe Husband by Renee Roszel
Enchanted Brides Book 3
The Enchanted Brides Myth:
The stately D’Amour mansion stands majestically in the countryside, its absentee owner rumored to be living in Europe. Closed for years, this mansion has a charming myth surrounding it. Legend says that the mansion is enchanted and that “an unmarried woman who sleeps within its walls on her birthday, when the moon is full, will marry the first man she sees in the morning."

When two ex-lawyers come together over a property dispute...watch out cupid, it might not be your arrows that are flying through the air. Or are they?

Elissa Crosby was living her dream. With the help of her sisters they had bought an inn. Sure she was a bit envious of the love her sisters had in their lives, but she wasn't the marrying kind. And then he arrived. The man with the power to ruin her life and take away her dreams. And her betraying heart still found him handsome.

Alex D'Amour had found out he inherited the old mansion and he had big plans. He had been a top lawyer and he would get what he wanted. A man who didn't believe in love and kept his emotions locked up tight. What was only a name before his arrival became a flesh and blood, feisty red-headed woman that was about to turn his world upside down.

What a great series! These three books were all so enjoyable. The first books are To Marry A Stranger and Married By Mistake. They are humorous and serious along with being romantic. Three sisters who put their money together to buy an inn and three men who fell for them, even if an old myth seemed to give them a push. Definitely a series worth reading.
http://justjudysjumbles.blogspot.com/2013/04/renee-roszel-book-list.html