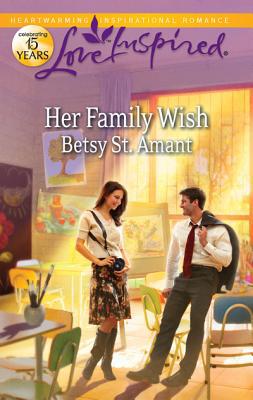 Taking pictures of other people's happiest moments is the perfect job for Hannah Hart. Secretly fearing that she won't ever have a family of her own, Hannah prefers to hide behind the camera. Until she meets assistant principal Jude Bradley, whose twelve-year-old daughter instantly bonds with Hannah. Jude might just be the man to give Hannah a reason to smile -- if he can let go of the past. The more Hannah and Jude discover they have in common, the more Hannah wonders if there's a family in her future after all....
Reviews from Goodreads.com

Hannah Hart is a photographer who is helping out her art teacher friend by teaching the children photography. She gets involved in helping to save the art program when it's in danger of having the funding cut.

Jude Bradley is the vice-principal at the junior high. He's also a single father of a seventh grader. He was told by the principal that he must either cut the art program or the sports program. He must type up the proposal to present to the school board.

Their lives are complicated! Hannah was involved in a car accident that not only left her scarred on the outside, but left scars on the inside that killed her dream of ever having a family. After being rejected by her fiancé, she has given up on ever having the family she always wanted. Jude is way over-protective, but for very good reasons. His wife was a model and did a lot of awful things. He's so afraid of his daughter doing the same things!

I thought Jude's story was wonderfully done. At first I thought crude and over-reacting, but then I think about how protective I am of my own child and can see myself doing some of these same things (different topic since he's a boy though). I felt bad for Jude having to make such a tough decision about the board report.

And I liked Hannah. I felt bad for the accident she was involved in and for the dream that had died. But I thought the way she "assumed" Jude would choose her program over the other was pretty self-centered. I think Jude was making the right decision and thought it was awfully cruel for her to treat Jude the way she did. He was doing the best he could! I was almost disappointed at the outcome of that fight, thought I think it was pretty ingenious for him to come up with. In the end I liked him for the final choice, and I think the art program deserved rewarding. I just didn't like how Hannah threw it in his face...And of course the last chapter was precious! I loved the father-daughter in this story!